Breath of fresh air for carers

Stepping Out with Carers co-organiser, Sue Mott, tells us about a pilot project we're funding that's helping carers – and the people they care for – experience the joy of walking 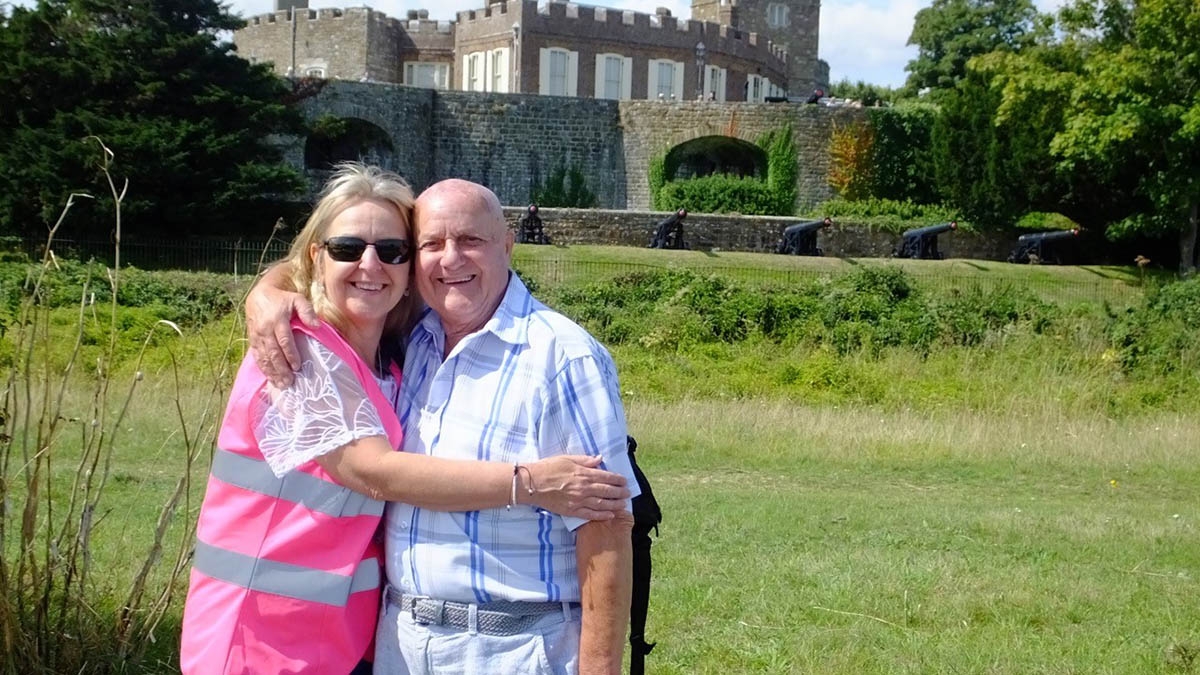 It was a curious thing. The organisers of the White Cliffs Walking Festival in Kent were baffled that for the third year running their walk for disabled people had produced no takers.

The venue: scenic. The weather: fine. The volunteers: ready to go. The customers: none. It was a great disappointment, and maybe the walk should be withdrawn forever, they concluded. Obviously, there was no demand.

This seemed odd, though. Why would people, no matter what their disability, not enjoy a stroll – or a wheel – in the great outdoors? The baffling continued.

Then a chance encounter with someone from a Carers’ Support organisation offered a glimpse into the truth.

Disabled people and those who cared for them would absolutely love the exercise and sociability that walking entails, but they frequently suffered a perfect storm of hindrance.

Health issues and financial problems, chief among them. Isolation, loss of confidence, a lack of feeling connected to the outside world. Depression, loneliness and a sense that the four walls within which they inhabited had become some kind of prison. It was hard to spring open the door and take that first step.

That’s when Stepping Out with Carers was born.

In March 2017, a walk – in fact two walks – were offered in Folkestone. An easy one along the top of The Leas with glorious views over the English Channel, and a more challenging route down a zigzag path to the seashore (and hopefully up again).

It was made known that this was an event specifically catering to the disabled and their carers. Carers’ Support organisations spread the news among their clients. Transport could be provided for those who had neither the finances nor the vehicles to get to the start line. And a snack lunch would round off the activity.

Everyone involved, not just those with a disability, reports physical, mental and emotional benefits from the very simple fact of getting together

co-organiser, Stepping Out with Carers

Rambler volunteers would chat, guide and wait with those who needed to go at a slower pace. All kinds of disabilities, from dementia to Parkinson’s disease, cancer to learning disabilities, could be welcomed when the practical barriers were removed.

Thirty-six people attended. And that was just the beginning.

There have been eight monthly walks this year and the attendance figures have steadily grown, culminating in a beautiful walk along the sea path at Deal during the White Cliffs Walking Festival, when more than 50 people turned up for the fun and a challenging three-mile route.

Joy Stickells, a carer for her husband Tony, has chronic arthritis and is managing a diagnosis of multiple sclerosis herself.

Joy said afterwards: “We had such a lovely time. Tony really enjoyed it and was pleased that I made him come [for the first time].

"We could not have wished for a better way of spending our wedding anniversary. We were surrounded by friends – new ones many of them.

"He hasn't stopped saying how lovely it was and how he enjoyed talking to others on the walk, especially Bill. He is looking forward to coming again, I just wish he had come before as he enjoyed it so much.”

The plan is to offer a further set of walks in 2018 across a string of new venues from seashore, to stately home, from rolling Kent countryside to the iconic White Cliffs themselves –  and to spread the idea to other areas now that the concept has proved so successful.

It turned out there was a demand. Just not the right kind of supply.

Everyone involved, not just those with a disability, reports physical, mental and emotional benefits from the very simple fact of getting together and enjoying an outdoor mini-break with (sometimes, admittedly) cake. Friendships have been made, offshoot activities organised and new people regularly welcomed.

A walk is the simplest thing in the world. Free, healthy, heartbeat-raising and a release into an outside world that for many, stuck at home, seems unattainable.

So, with the wonderful cooperation of all the people involved – Ramblers GB, Carers’ Support organisations and Sport England – the project is set to continue.

Its motto, if there was one, would be this: Every Adventure Begins With The First Step.